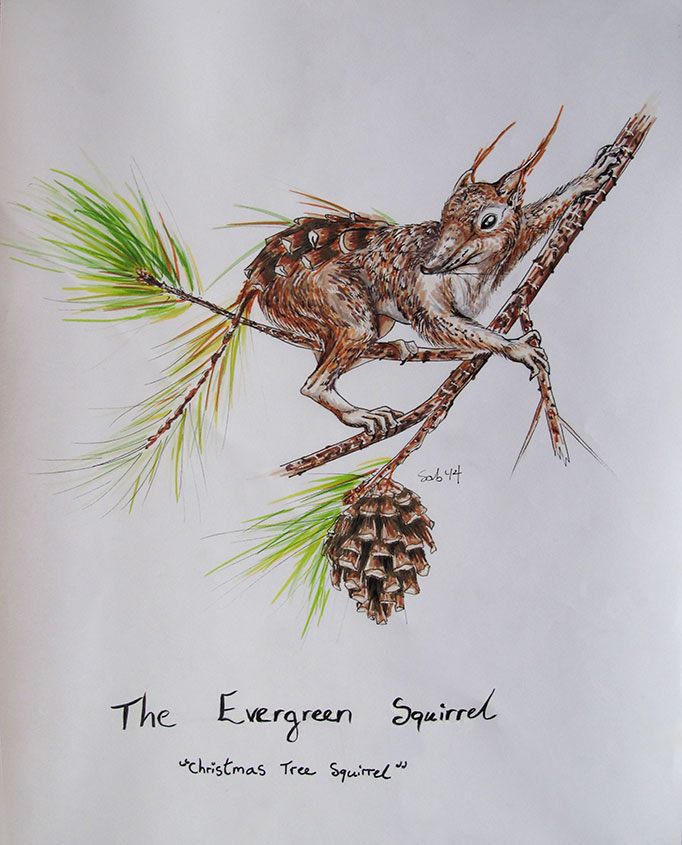 Happy Holidays! The Evergreen Squirrel is what I came up with for our final Nature Sketching assignment, in which we had to invent a creature based on our previous class (or personal) studies. Considering the number of animals we had looked at, I decided first to come up with a little backstory. Where does it live? What climate does it have to deal with? What does it eat? And so on… My initial requisites where that it had to live in Canada, being able to survive our harsh winters. And, considering the time of year, I wanted to put a hint of Christmas into the design. Wildlife biologist that I am, it also needed to be realistic and above all else, believable! Read on for more research, sketches, and process (yes, ‘back’ pine cones ARE possible)! 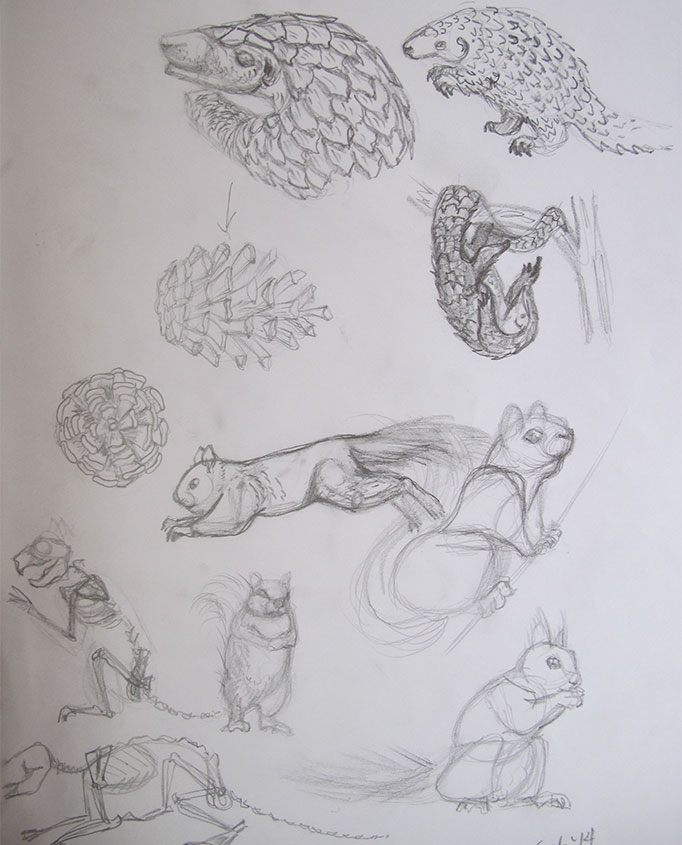 Once I had decided on a “squirrel-like” creature, I investigated the possibility of such an animal to have scale-like structures… lo and behold, there does exist a mammal, the Pangolin, that has a body covered in ‘keratin’ scales to protect it from predators such as lions. Tweaked ever so slightly, these could definitely be passed as pine cone-like.

We all know Porcupines with their ‘terrifying’ quills… yet another structure made up of keratin. Inspired, I decided my creature would have a tail mimicking the needles of a pine tree. Furthermore, the keratin ‘needles’ would appear greenish, as they would be structurally similar to a bird’s feathers (among other things, there are little air holes that reflect light in order to create their vibrant colors).

Finally, as this squirrel could theoretically use its ‘pine cone’ coat for storage, it’d make sense for it to have a longer nose to be able to reach into the scales’ crevices.

A final quick couple of sketches before moving on to the final piece… For the scales to really appear like a pine cone, they would not cover the creature in its entirety. And the tail, while appearing close enough to a bunch of pine needles, would not come out from one point, but all along the tail. Naturally!

Close-up of the final creature; its fur is supposed to appear similar to a pine branch.

Fun Fact: its nickname, Christmas Tree Squirrel, comes from the fact that these little guys are often found in trees that people have brought into their homes during the holiday season. Surprise!

Thanks for reading, have yourselves a great weekend! :)