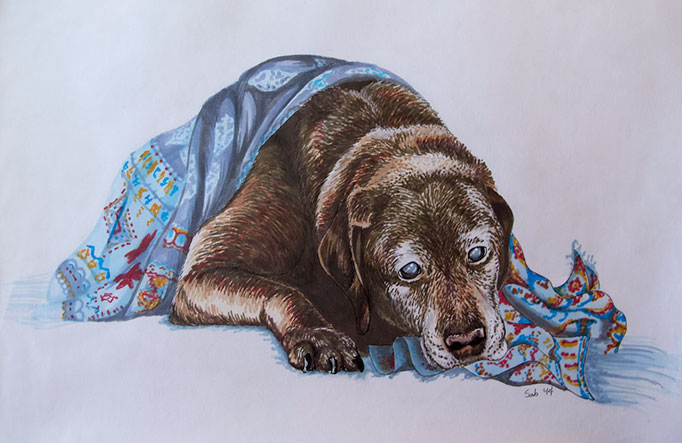 Did this as a commission for a gift in December, and now officially able to post it! This is the late Candy in her older years, hence the cataracts. This is actually my very first pet portrait commission, and what got me into the idea of making it into a specialization of mine. Still working on finding clients, though… a search kind of put on hold as I’m focusing on Montreal Comic Con stuff at the moment. Read on for some WIP shots and a closeup!

The preliminary sketch, based off a few photos I had of her. 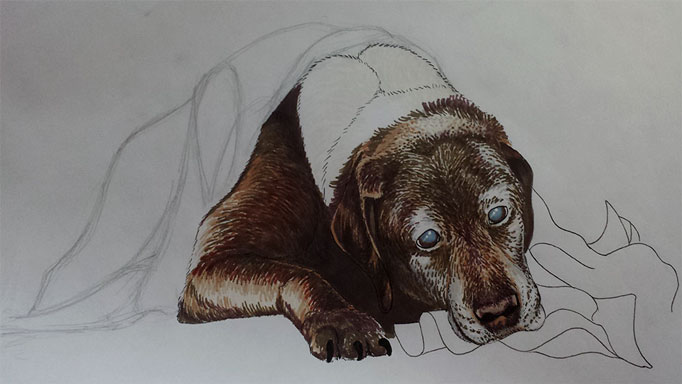 In the middle of it all! You can see literally everything from sketch to lineart to the mutiple rendering steps! This was the second large scale animal portrait I had done with promarkers, so I was very cautious in making my creative decisions… I think it turned out OK in the end, though ;)

Finally, a closeup of the end product.

Hope you enjoyed, expect more soon enough and have a great day! :)

The final assignment to the current class I'm taking at #svslearn is to create a prop ensemble, but this is the main prop I worked on during the course... Our task was to choose a setting/environment and create a lamp that would fit that setting. I chose an old/nearly forgotten fantasy story of mine and this particular lamp/light (I created a floor lamp) was inspired by a race of woodland humanoids. The singular lights are able to be removed and used as torches if need be.
Another #draw30littlethings! I'm at number 5 now... 30 seems like a lot, I have no idea how people manage 100 days of things 😵 Between work, being a mommy and taking online classes, I'm squeezing these things out when I can.
#draw30littlethings personal drawing challenge number 4!
Our little spider made it on to another sketch! Little does he know that the fire doesn't actually offer much warmth (technically it shouldn't be giving off any light either but I wanted to throw some front light in there 🤷🏻‍♀️).
2nd of my #draw30littlethings personal art challenge. My 3-year-old made me this paper towel caterpillar, and he's sort of become my desk guardian. Luckily there haven't been many spiders for him to chase away... 😬🕷️
My children have been watching babybus on YouTube a lot lately and so we've seen a lot of forest fire emergencies 😅🔥